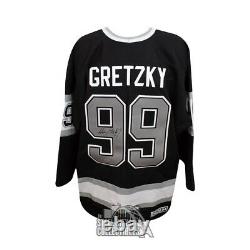 For eight seasons, Wayne Gretzky maintained his hall of fame level play while wearing the iconic number 99 as a member of the Kings. While one fan base was disappointed with his departure, the Great One was capturing a new avid fan base in southern California. The Great One has signed the back of this replica CCM jersey in black paint pen. Gretzkys signature was witnessed under UDAs Five-Step Authentication Process.